These Notes are Very Important Topic for Competitive Exam & Best Content is Here With Sarkariresultupdate where you Get Best Study Materials & Get Best Result.  so Thus Students are interested in Download Below Given at Indian History Question. 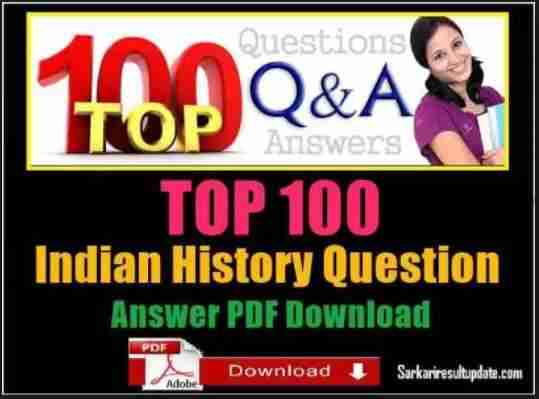 1. Which animal had the Stone Age people first? – Sheep
2. In Indus Valley, which one indicates commercial and economic development? – Seals
3. What was the main occupation of the people of the Indus Valley civilization? – Agriculture
4. What was the main characteristic of the Indus Valley Civilization? – Town planning
5. Of which metal was the famous figure of a dancing girl found in the excavations of Harappa? – Bronze
6. Which element of Hinduism was practiced in the Indus Valley Civilization? – Cult of Shiva
7. What was the source of the blue gemstone, lapis lazuli, for the people of Harappan culture? – Afghanistan
8. Which animal was domesticated by the Harappans? – Buffalo, sheep, dog, pig.
9. Which has proved the best source of information for depicting India’s ancient history? – Inscriptions

10. Which Indus city was known for water management? – Mohenjo-Daro
11. Which God lost his importance as the first deity during the Later Vedic period? – Varuna
12. Which god was not worshipped during the time of Rigvedic Aryans? – Shiva
13. Who was the mediator between man and gods according to the Vedic people? – Agni
14. Which was the main characteristic of the later Vedic age? – Caste system
15. How were the ritualistic precepts attached to the hymns of the Vedas known? – Brahmanas
16. What did the name ‘Ratnakara’ denoted In ancient Indian historical geography? – The Indian Ocean
17. Which of the Vedas was divided” into “White’ and ‘Black’ parts? – Yajur
18. Which Veda throws light on the beliefs and practices of the non-Aryans? – Atharvaveda
19. Which animal was known to ancient Vedic people? – Lion
20. In which Veda does the word ‘gotra’ first appearance with the meaning of ‘ a clan’? – Atharva Veda

21. In which book has Buddha been described as an ocean of wisdom and compassion? – Amarakosa
22. Which rulers held a religious assembly at Prayag every five years? – Harshavardhana
23. Who was the greatest Buddhist commentator of the Buddhist canonical literature? – Ashvaqhosha
24. Who according to the Buddhists, is believed to be the next incarnation of Gautam Buddha? – Kalki
25. Who was the first king to have the image of Lord Buddha inscribed on his coins? – Kanishka